Report on the ICOM Member Feedback for a new museum definition

ICOM Russia is honored to share the results of developing the new methodology of the concept of “museum”.

National and International committees of ICOM, Regional Alliances, and Affiliated Organizations are taking part in the development of the new concept of “museum”.

53% of National committees have sent their research results to ICOM. ICOM Russia is actively involved in the development of the new methodology.

ICOM Russia formed a working expert group to develop a definition of museum, which includes museum staff, representatives of the academic environment, consultants and researchers in the field of museum work.

The Working Group developed a questionnaire and conducted an online survey aimed at identifying keywords and phrases for the development of a new definition of the concept of "museum" (in the period from March 12 to March 26, 2021)

Based on the results of the survey and the discussions held, the experts processed the results, as well as gave recommendations for drawing up a new definition of the concept of “museum”.

The survey was formed based on the main functions, goals and objectives of the museum and included five main questions:

What is a museum?
In answering the first question, the most frequently proposed defining and generalizing concept was the term social institution.


What does the museum do?

To this question, the working group received answers which define the main functions of the museum in the definition of 2007: to collect, to study, to preserve, to interpret, to popularize, to present the tangible and intangible heritage.


For whom and for what purpose does the museum carry out its activities?

The most mentioned words in this section are society, people.

What principles and values does the museum follow in its activities?

Among the principles and values of the museum, the following keywords were highlighted by the respondents: openness, accessibility, academic accuracy, authenticity, inclusiveness. The members of the expert group, based on the data obtained, additionally proposed the following wording: the value of diversity.

What is the main difference between the museum and other institutions? What is its specificity?

In the fifth question, it was suggested to indicate the main difference between the museum and other institutions. The most common concepts were the following:

We also invite you to get acquainted with an independent analysis and report on the results that were received from the members of the International Council of Museums, on the development of a new concept of "museum". 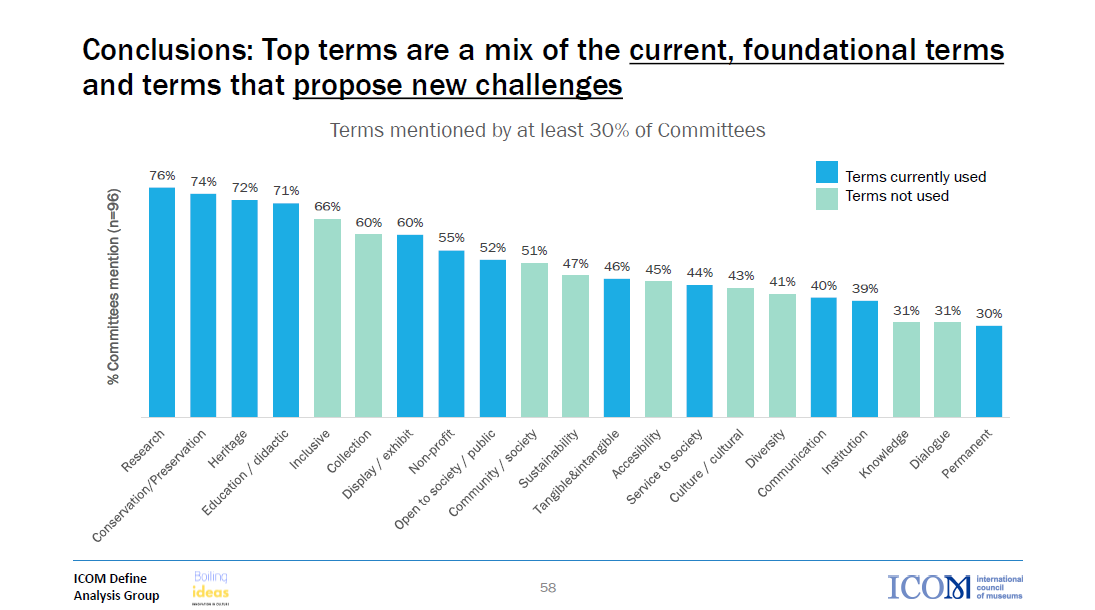